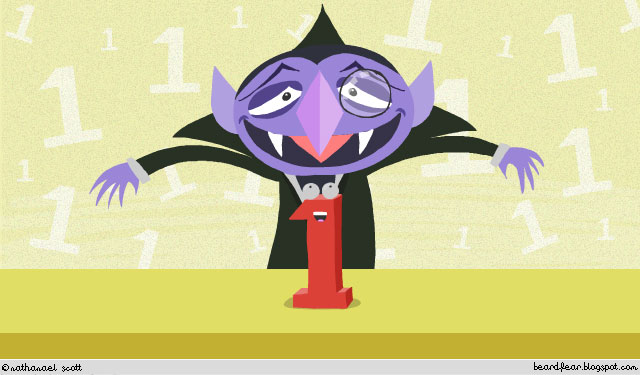 Loopdeloop is turning ONE this month, so they're celebrating with the loneliest theme, ONE.

I had originally considered doing a Highlander theme (THERE CAN ONLY BE ONE!), however, having never seen the film and a concept that started to get bigger than I cared to do in a month, I decided to change Loops mid stream. Drawing from a time when vampires were men and counting was sexy, this month's loop is a homage to Count Von Count. Counting one of things.

I tried to draw a cat as one of the things, but kind of failed, so it was replaced by a blender.

Also, I'm really in love with the song I used, In Fielder by Miro Belle. It's free under Creative Commons, so check it out. And remix it if you want.

Check it out on Loopdeloop

Sub note: I recently found out that the Count had a girlfriend The Countess. I actually remember the "Twenty Something" segment from when I was a kid, but not The Countess.
Posted by the dude at 10:04 PM